Few weeks back I blogged on "Photo Uploading" portals. Flickr was the best, however there was a upload limit in the free version and the number of albums you could create also was limited to 3.

At that same time, the google search had come up with a link to Riya. The portal boasted of a photo search based on "Face Recognition". I tried to sign up, but I found out that it was still in developement and asked for people to register for beta notification.

2 weeks back Riya sent out the beta invitation to the registered guys. Infact now Riya is open to public.

This is how Riya works 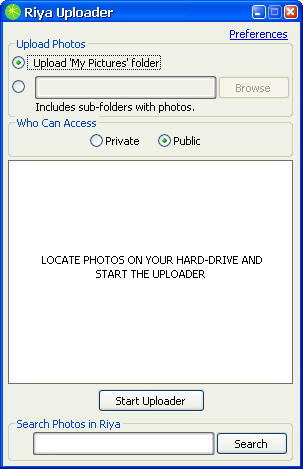 ) . Initially this recognition engine was built into the server, but later they found it slows up the portal a lot, and hence moved the processing to client side.

4. This is where you start training Riya to identify people. You train Riya to recognize say 15 photos, and from next time it will automatically recognize the face when you upload the photos.

There are different kinds of training available. check this "Take The Tour" section for more details

5. There are other settings you can do, like make the album public or private and also share the photos with your friends.

6. And the search is not just limited to face, Riya can also read "Text" within the photos and users can search based on this text.

There are host of other features like Calendar Search, training based on the email address etc.

So go ahead and experiment with Riya ! Search for "Venu" and see what you get !

Also do check out CEO Munjal Shah’s blog ! Worth Reading

Jobs at Riya (Bangalore and California guys Check out !)