On Saturday I attended the Barcamp Banglore !

I know many of you guys might be wondering what this Barcamp is. I too hadn’t heard of this word till Tara Hunt of Riya invited me over to Barcamp Bangalore !

As usual I had to look up in wikipedia and it came up with the following description :

In response to criticism of Foo Camp, BAR Camp was created as an open, welcoming, once-a-year event for geeks to camp out for a couple days with wifi and smash their brains together. Foo Camp happens every year; it is an invite-only event for technology luminaries hosted in Sebastopol, CA at the O’Reilly headquarters. People camp out, have sessions, and work with other great technology minds to come up with ideas. One criticism is the exclusivity: everybody isn’t invited. This is why BAR Camp was created as an open event.

The description was not very clear and I couldn’t visualize as to what exactly happens over a barcamp. So I had to be there to experience it. Here are some of the details of the event:

Who All Attended
All the attendee photos can be found at http://www.flickr.com/photos/tags/bcbattendee/
From the count of the photos in the above link it looks like around 100 people attended the camp. 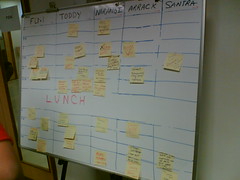 All the guys giving presentation booked their slots on the board kept at the camp. Anyone can give a presentation on any topic of their interest.Â  The presentations started at around 10. Some presos were very good, especially the one given by Chris on Microformats

What about Lunch/Dinner
Lunch was sponsored by Yahoo
Dinner was sponored by Riya – Since the number of people staying for dinner was low, the dinner was moved to Geoffrey’s.

Intersting facts
The photos of the camp were out in the flickr within 15 min or so. Courtesy:Wi-Fi. There were a few guys blogging about the event live !