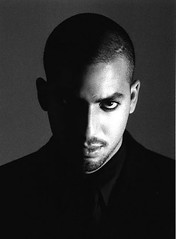 David Blaine wants to be the new Houdini, but he looked more like the boy in the bubble Monday. The performance artist lowered himself into a water-filled plastic sphere at Lincoln Center, which will be his home for the next week. He’ll get oxygen and liquid nutrients through one tube and use another to rid himself of waste, which isn’t exactly death-defying.

But not to worry — Blaine promises he’ll leave TV audiences breathless next Monday when his air source is cut off and he spends eight or nine minutes trying to escape 150 pounds of metal chains. The world record for breath-holding is 8 minutes, 58 seconds; Houdini’s record for the stunt was three minutes.