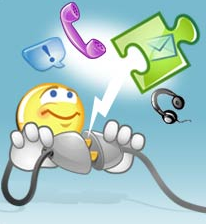 Compared to the earlier version (7.5) these features have been added: (Content Taken directly from yahoo web site)

Make it yours with plug-ins

Get the content you want, delivered right to Yahoo! Messenger and share it with friends while you IM. You’ll find handy plug-ins for Yahoo! Music, News, Finance, and more. Plus ones for eBay, Amazon.com, and more.

See what friends are up to

Use the Yahoo! 360° plug-in to get alerts on — then see — the latest photos, blog entries, reviews, and more from your friend’s Yahoo! 360° pages. Also send blasts and post blogs to your 360° page from the plug-in.

I don’t know much about Yahoo! 360° (Never tried it out and don’t intend to use it in the future), however the plugin concept looks interesting. With the introduction of plugins, Yahoo has opened up its IM for developers.

The Messenger Plug-in SDK is a JavaScript and C++ API that can be used to create add-ons with collaborative features that can run inside Yahoo! Messenger. More about it in this link.

Plug-ins run in the main Messenger window, or as part of an IM conversation. The installation comes with the following plugins by default. 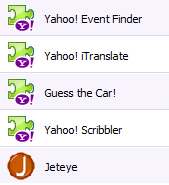 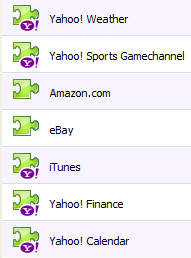 More plugins can be found at this link.

The previous version (7.5) used to steal a lot of CPU cycles. Even though the IM was not being used, the CPU usage used to shoot up to 60-70%. The current version looks much better on that front, but on the memory front it still does consumes a lot of memory. (Addition of plugins might make the matter worse).

Compare this with the memory used by Google Talk .

But the point to note is that Yahoo IM does provide a lot of features compared to Google Talk, and might be the reason for a bigger memory footprint. (And I use only the Chat and Stealth setting feature in Yahoo )