One of the features I liked in Google Desktop was the Quick search. Using this, I could quickly invoke the programs in the Start Menu, other than searching the files in my computer. 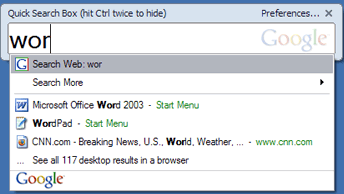 But there were other reasons for me not using Google Desktop in the first place. It didn’t work well in my office system. After I install Google Desktop, the Google 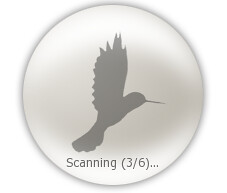 Web search stops working. (Even after giving feedback, I have not got a response from Google)

Even the desktop sidebar is bloated with a lot of plugins/gadgets (Yup, it can be configured, but If I wished to have a few needed plugins in the sidebar, it looks bloated)

Anyway this post is not intended to be a review on Google Desktop. I happened to find a nice little tool called Colibri, which can be used quickly launch applications using keyboard. The tool is still in development as is supposed to mimic Quicksilver for Mac.

Here is what the website says about the tool:

Colibri combines the raw power of the command line with the intuitive nature of a modern graphical user interface to define a revolutionary new way of managing your computer.

The Colibri help page seemed to list down a host of pretty interesting features like using Google Search, Volume Control etc. Later I found that most of these features are yet to be incorporated into the application.

The feature that is currently working and which I like the most, is the ability to quickly launch start menu applications. Colibri also scans the control panel applets and you can invoke any applet on the fly.

Here is how it works

2. Now if you want to invoke say iTunes, just type it ! You will be prompted with a interface like this 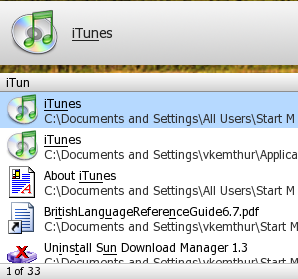 3. Press Enter to invoke the application

4. You can also invoke Control panel widgets by typing the text. An Example of invoking Add/Remove programs is shown below 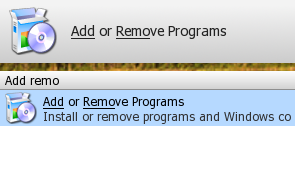 Get Clear with ClearType
Zidane ..