Wondering about the title ? Rappai is the name of the champion eater who is currently resident in Thrissur. Also known as ‘Theetta’ (monstrous eater), this guy shot to fame after he took on a Thrissur hotel that offered an all-you-can-eat buffet. He polished off everything in the kitchen, and finally the hotel owners asked the police to intervene !!

Once college students took sweet revenge on a restaurateur with Rappai’s help. He took an “unlimited meals” coupon and emptied the day’s food — three buckets full of rice, one bucket of fish curry and 10 kg cooked meat — in no time.

Since then, Mr. Rappai’s presence has been the staple of eating competitions across the state. He has been the mascot of eating and good food, and many hotels in Thrissur display his photograph !!

Now wondering why is he in news ? Two weeks ago, a severe tummy ache forced him to consult doctors. After his week-long hospitalization, doctors have advised the eating sensation to cut down his food intake or be ready for serious health problems.

The hotels in Thrissur are relieved and they are planning to restart all-you-can-eat buffets !

Wondering how he looks ? Check this photo. (The guy on the left is Rappai) 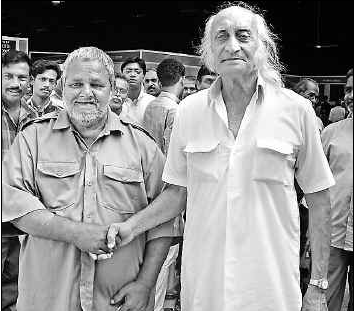 The guy looks very “skinny” compared to what you might imagine after reading about his amazing eating capabilities.

Wondering who the guy on the right is ? His name is Hira Ratan Manek. This guy seems not to have eaten for the past 10 years. Every evening, he gazes at the sun for an hour without batting an eyelid. This is his main source of food. !! Occasionally, he drinks coffee, tea or water. He reportedly gave up eating after a visit to the Himalayas in 1992.

His claim has been tested by medical experts and widely reported in the media. In 2002, Mr. Manek was taken to Thomas Jefferson University and the University of Pennsylvania in Philadelphia where he underwent a 130-day observation as part of the National Aeronautics and Space Administration (NASA) research programme to solve food storage and preservation problems during space expeditions. The scientists verified that Mr. Manek spent the entire period surviving only on water and named his technique, HRM (Hira Ratan Manek) phenomenon.

Guess what, this guy has a own web site http://www.solarhealing.com/. Check it, it’s pretty interesting

When they met this is what Rappai told to Hira Ratan :

“Good Lord! I can’t be like this man, How I can forgo those mouth-watering delicacies. “ Any comments ?? 🙂