I am not sure how true this is, but it seems that Mozilla got a cake from Microsoft IE Team for the release of Firefox 2.0 ! 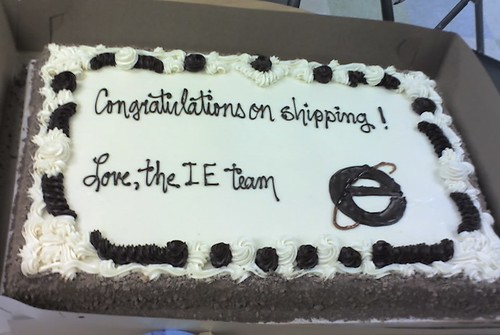 Checkout some interesting comments for this post on Digg

even their cake probably has bugs in it

It was a nice gesture from the IE7 team. I guess developers don't take these "browser wars" as seriously as the users do.

One reason why the above comment is true is because the IE team needs browser wars to keep their jobs. If Mozilla doesn't keep posing a challenge, the Microsoft IE devs will eventually lose their jobs since there won't be a reason to keep improving. They're effectively thanking the Mozilla team for letting them keep their jobs.
And they're both probably laughing their asses off at the fanboyism. I wouldn't be surprised if Mozilla and Microsoft IE devs go partying together.

They should send us web designers a cupcake for all the headaches they've caused.